You are here: Home / Essays and Articles / News: Scientology Cult Shut Down Over Shady Land-Grabbing Black Ops in Moscow (2017) 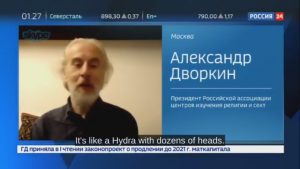 Reporter: An influential cult. In the Moscow office of the Marins Union Group the police conducted searches investigating theft of land in Moscow Oblast.

The group has a sketchy reputation: it has close ties to Scientologists.

Varvara Nevskyaya with the details.

This Wednesday, Marins Group was searched by the Investigative Committee.

Both offices and private residences of the top-management have been searched.

But the Group had become infamous long before it drew the attention of the police.

Its scope of work is stunningly diverse. How can a single enterprise build high-rise houses, manage hotels, own medical centers, and film movies?

But that’s not everything worth knowing about this mysterious group.

Alexander Dvorkin, Center for the study of religions and sects: “Back when they were in Nizhny Novgorod and called themselves “Zemlyane,” the local medica revealed their close ties with Scientologists.

They are using the methodology of Hubbard, the founder of Scientology to run their business and to force their employees to take part in dianetic seminars.”

However, Scientological teachings couldn’t protect the company from an investigation team showing up in their head office in the north of Moscow.

The Group has allegedly stolen some public and municipal land in Moscow Oblast.

Alexander Kulikov, the founder and former CEO of Marins.

It’s a known fact that he joined the ranks of Scientologists in the early 90s by visiting specialized and then studying in the US Scientology center for 11 months.

It was Kulikov who made his employees visit all the Scientology seminars, read special literature, and go through “auditing,” a mandatory procedure in Scientology when a drugged person shares personal incriminating information in front of the camera.

The information is stored in the local Scientology cells with a copy sent directly to the main office in Los Angeles.

Kulikov died in a helicopter crash in 2016.

However, the company’s structure and ideology remained the same.

Igor Ivanishko: “Unfortunately we can’t say something’s changed. Its activities are based on the principles of Scientology that ar illegal in the majority of countries. In Russia, certain Scientological literature is considered to be extremist. And unfortunately, the situation’s developing in the same direction.”

Then why do such organizations as Marins still exist?

It is because only religious activities of certain groups of Scientologists are prohibited in Russia while the movement itself besides the religious component has other aspects.

Alexander Dvorkin: “Scientology has many organizations. It’s like a Hydra with dozens of heads. We managed to close one, but the other heads are still functioning. We must focus on the ideology rather than a certain organization.”

One of the principles of Scientology reads: “people who don’t accept Scientology are dangerous and need to be isolated.”

That means to strip their rights. This very ideology became the undoing of the Moscow Church of Scientology.

A local religious group is currently being investigated in St. Petersburg too.

Still, Marins Group is not in trouble with the law for being a religious organization. Despite all the facts, the Group is trying to conceal their religious commitment.